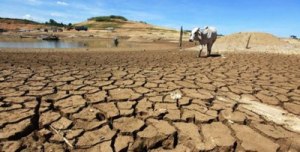 A young Zambian teacher from Lusaka, Steven Mweemba Dekete, is concerned about the lack of information on climate change in Africa. He knows about some of the effects of climate change, but is ignorant about its specifics. He thinks it is important that the region’s youth better understand the issue, which will allow them to take a more active role. Dekete has a keen interest in teaching his students about climate change, but how can he do this when he is not equipped with information about the issue, its effects and how it will affect Africa’s future?

Jaimeson Hamunene, a village head in the Southern Province’s Jembo area, said youths, especially in rural areas, are unaware and uneducated on climate change. Hamunene has appealed to government, media and other stakeholders to launch a campaign on the subject. He said the country risks being plunged deeper into poverty if it doesn’t address the issue. “When climate change hits badly, in terms of weather such that farmers cannot farm properly, there is a high risk of starvation in the country. This can translate into poverty, and youth who are depending on agriculture as a source of livelihood, will be adversely affected.”

With many Africans dependant on agriculture, the effects of climate change cannot be underestimated. With rainfall patterns changing and issues of water security becoming more pronounced, rural women and children will soon bear the brunt because they have to travel extra kilometres to fetch water and firewood.

It is these same people who currently lack an understanding of climate change and the changes it is bringing to their communities. Educating the youth, including young teachers and leaders like Dekete, will help them become agents of change in Africa.

Little is currently being done by government and other stakeholders to ensure that Africa’s youth play an active role in mitigating the effects of climate change. One thing is for sure: if they are not involved in coming up with solutions, today’s youth will inherit a depleted Africa.

“When climate change hits badly, in terms of weather such that farmers cannot farm properly, there is a high risk of starvation in the country”

Yet all hope has not been lost. During the Pan African Youth Conference on Climate Change in early August, African youths launched the Climate Justice Caravan ahead of the COP17.

The Climate Justice Caravan brings together more than 100 young environmentalists and climate change activists. It will begin its overland road journey in Nairobi in early November and travel through Tanzania, Malawi, Zambia, Botswana, Mozambique, Lesotho and Swaziland before finally arriving in South Africa. Each stop will see the young activists taking part in awareness raising activities to help mobilise support for climate justice; meet and interact with government officials and other leaders; and to discuss positive and progressive ways for African youth to engage with climate change as one of the most important issues of their time.

Some Zambian youths have also taken up the challenge in order to help sensitise fellow youths, like Dekete. The Caravan will arrive in Zambia on 15 November and those involved are expected to host a massive music concert to endorse the campaigners’ message and hand over petitions to be taken to COP 17. Currently, Zambian youth are meeting with stakeholders to present a concept paper on the topic, lobby government to include at least five youths in its delegation and mobilise funding for more awareness campaigns.

Many other youths like Dekete are concerned about climate change and are calling on governments to put in place workable measures to better control the threat. They do not want to inherit a depleted Africa.

African youth have spoken and it is high time governments and stakeholders consider involving them in the fight to halt the worst of climate change. These are the future leaders of the continent. They should be given the chance to take responsibility for their environment.

From 28 November to 9 December 2011, Africa will host a historical meeting on climate change in Durban, South Africa. Different stakeholders will come together to discuss solutions to decisively deal with the growing threat of climate change.

Parties to the United Nations Framework Convention on Climate Change (UNFCCC) have met annually since 1995 to discuss progress towards dealing with the global issue. The meeting in Durban, called a Conference of Parties (COP) will be the 17th such meeting: COP17.

Africa Group Negotiators (AGN) on Climate Change met in early August in Durban to discuss Africa’s position for COP17. The AGN noted that the need to protect future generations is a key priority for Africa. Thus, African youth should play a key role in communicating the urgency with which governments and stakeholders must address climate change. This includes young African women, who will be most affected by climate change in the region.

Perpetual Sichikwenkwe is a Zambian journalist. This article is part of the Gender Links Opinion and Commentary Service special series on climate change.